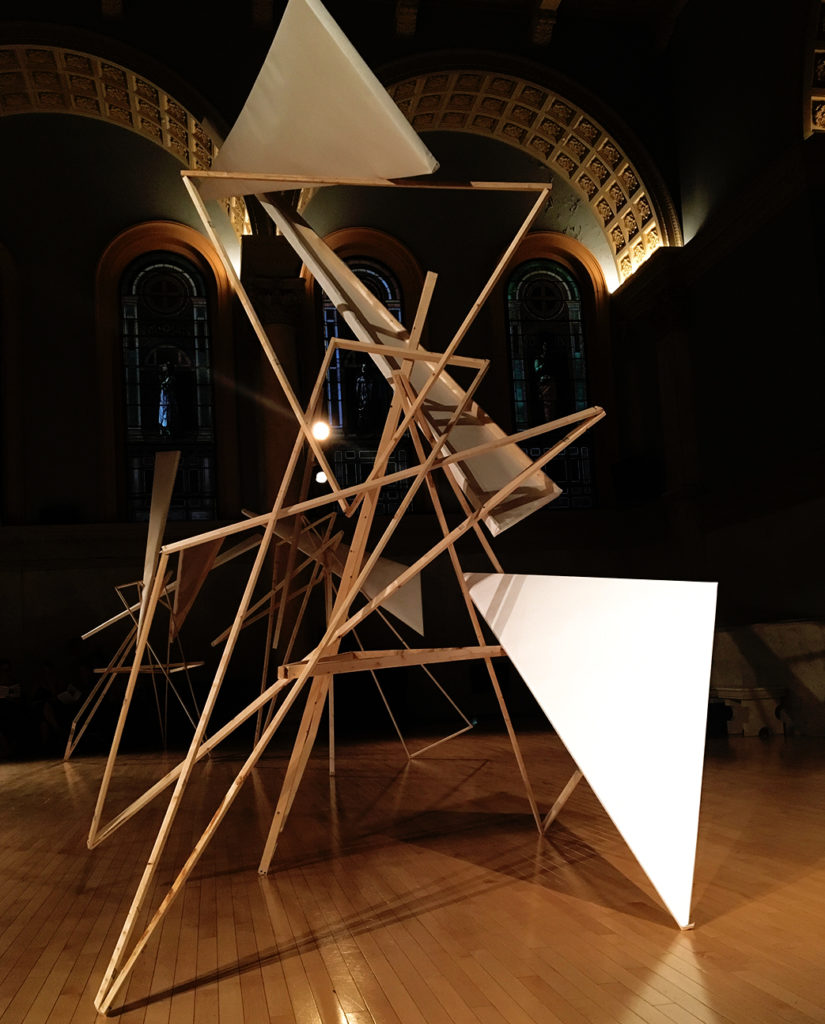 I had the chance to attend a very intimate dance show called Failure, choreographed by Laura Peterson. I say intimate because the setting were two rows of chairs that extended around the staging area at Judson Memorial Church in downtown New York. All the chairs that made the church a congregation were removed to form this U formation, it wedged the gap between the performers from the audience.

An installation designed by Laura Peterson and Jon Pope (photographed above) took up the majority of the dance floor. It looked rigid and fragile at the same time, it was made up of small pieces of wood nailed together with sheets of material attached to give it texture and life. They were the first and only thing I took a photograph of that evening and I'm happy that I did capture them in their beautiful prime.

When the dance performance was introduced and the music started, I was instantly transported to another world, one where failure became an art, struggle was a movement and victory was killed rather quickly.

The dancers danced their hearts out, representing perfectly what it means to struggle in a world where everything is a competition, the mirrored movements represented the ways people imitate each other in order to get the same results in life not knowing or caring that everyone must do things their own way, because we are all a little different from each other. The dance embodied how easily someone can quit after doing the groundwork to build their life because things got too hard.

When the performers and the installations became one, there was an electricity in the air, the movement of the very rigid structures looked like birds flying around freely, ready to take on any tribulation with ease but that was an illusion that would be shattered. The first dancer fell from a broken piece and everything spiraled into darkness not long after. We had come to the stage of destruction and I sat and watched as each performer demolished every piece of installation with a smile on my face.

I realized that I was smiling and I accepted my reaction, I didn't cry because they were destroying an art piece that made the show beautiful but I embraced the emotion of anger and frustration that was being exuded by all four dancers. They left a pile of debris in the back of their staging area, a pile of rubbish that represents all the wasted effort they spent mirroring each other in order to get the same result.

One dance cut himself during this process but immune to all pain because of the adrenaline rush he kept breaking the wood, and then the race to the finish line was on.

The only male dancer was the first to quit and take his place of shame on the elevated stage while the ladies fought to be the last one standing. The intensity of this quickly became confusing because they kept mirroring each other.

Confusion turned to laughter when everyone realized how ridiculous this was and then one by one they started to dwindled like burnt out stars.

And then there was one.

The victory was short lived however because the winner quit right after she realized that she had won. Holding on to the wall for support as she climbed the stairs to take her place beside the others.

While all this is going on right in front of me, my mind kept thinking about all the times that I did the exact same thing. Was I failing myself the whole time believing that I was doing something great?

Failure to me means accepting the situation that you're currently in even though you want better for yourself.

Failure is giving up on yourself.

While the dancers exuded strength and destruction, we too in whatever lives we live are exuding the same characteristics. We hate our jobs but refuse to leave, we follow a trend we don't understand, we sit back and watch life pass us by because we're too busy playing house with someone we despise, we lie to ourselves to sleep somewhat peacefully at night but does any of these things help?

I've been in relationships that were toxic and I stayed because I was scared of being lonely, I've indulged in hard drinking because I didn't want to feel left out, knowing that I absolutely hate the feeling that it gave me but that never once stopped me from walking head first into it every time. I went through a destructive period where I deliberately sabotaged everything that I came in contact with because I was angry at the world for failing to see who I really was. Did that make me a failure? Indeed it did.

Under the smile and fun I exuded outwards, inside I was nothing but a broken girl.

It takes time to accept a situation for what it really is, the good thing about failure is that it's not permanent unless you do nothing about it. Everything in life is temporary. Failures are lessons that we need to learn from, that I need to learn from, it's only when you've accepted that things cannot be changed then that's when they appear to be unchangeable.

Don't accept mediocrity and strive to be the best, there are downfalls at every corner in life but our reason for living should be getting back up, dusting off and take what we've learned from that fall and avoid falling again in the future.

What does failure mean to you?